The "Escuadron Aereo de Pelea 201" (201st Mexican Fighter Squadron) of the Mexican Expeditionary Air Force (Fuerza Aerea Expedicionaria Mexicana) has the honor of being the only military unit that has fought outside of Mexican Republic.

Mexico joined the allies against the Axis Powers (Germany, Japan and Italy) after May 28, 1942, when German U-boats had attacked and sunk two Mexican ships without warning, even after the declaration of war Mexico would lose 5 more ships.

With Mexico's entry in the war, its military benefited from the Lend-lease programs, that helped modernized the Mexican Army, Navy and Air Force.

But it was in 1944, that the desicion to send a Mexican military unit was made by Presidente General de Div. Manuel Avila Camacho, choosing the air force to represent the Mexican Armed forces.

After a selection process a group of over 300 personnel was formed to be sent for training in the USA, this group was called Grupo de Perfecionamiento Aeronautico under the command of Col. P.A. Antonio Cardenas Rodriguez (1905-1969), a veteran flyer who had participated in a Mission of observers in North Africa in 1943.

When the group arrived in the US, in July 1944, they were sent to different parts of the country to be trained by specialists to form a fighter squadron, that was to be equipped with the Thunderbolt fighter-bomber. Later they would be reunited at Pocatello AAFB in the state of Idaho. But due to severe weather conditions, the training was moved to the state of Texas, in November 1944 where the GPA completed its training on February 23, 1945.

During their training a selected group of American instructors was formed known as Section I , which was commanded by Capt. Paul B. Miller (24 Aug.1944 - 14 Jan.1945) who was replaced by Lt.Col. Arthur W. Kellong. By November 1944 the section comprised of 23 officers and 31 enlisted men.

Before that date the GPA had by January 1st, 1945, become the Mexican Expeditionary Air Force under Col. Cardenas and the 201st Mexican Fighter Squadron under Capt. 1/o. P.A. Radames Gaxiola Andrade (1915-1966). A group of American personnel to include pilots and ground personnel was included in the MEAF, for duties overseas, this group was led by Lt.Col. Kellong (USAAF). Also created was a replacement group of personnel under the command of Major P.A. Rafael J. Suarez Peralta. 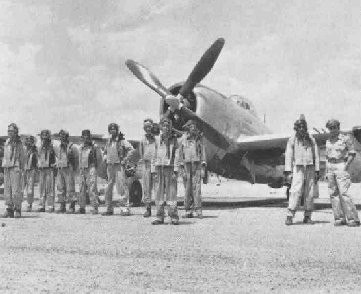 
Not only did the pilots get into combat, but also certain members of the ground personnel who encountered Japanese troops, having some fire-fights and capturing a number of enemy troops as well.

201st Squadron started to receive its own P-47D, under Lend-Lease. In July 1945 the 201st flew 4 "Fighter Sweeps" to the island of Formosa (Taiwan), and in August a dive-bombing mission to the Port of Karenko. The final mission for the squadron was a convoy escort mission in the North Sea of the Philippines where all the pilots took part.

The 201st would lose five pilots in the P.I. in accidents and transferring new aircraft from New Guinea to the Philippines. These losses were pilots in command positions, that would later affect the 201st, when the 58th was moved to Okinawa to continue operations against Japan. It was decided to leave the 201st Squadron in the P.I. and await the arrival of replacements to make good the losses the squadron had. One of the Mexican pilots thought lost at first was rescued by a test pilot out of Biak, New Guinea and C.O. of the 374th Service Squadron Major Larry D. Davis who was years later decorated by the Mexican government.

Also two more pilots were killed in training in the US as part of the replacement training in the Southern part of the USA. One ground personnel also died in a US hospital due to illness contracted in the Philippines and had been evacuated back to the US.

The historical tradition of the MEAF is carried on by Escuadron Aereo de Pelea 201 that is today based at Cozumel, Quitana Roo of the present day Mexican Air Force flying the Pilatus PC-7 Turbo-prop COIN/CAS trainers. This unit saw action in the Chiapas rebellion of January 1994.

• 53 ground support missions flown in support of American troops in Luzon from 4 June to 4 July 1945,


• 1 dive bombing mission against the Port of Karenko, Formosa, 8 August1945,


Note There is a discrepancy among American and Mexican records on the type and the amount of bombs dropped by the squadron. A translated copy of the summary of all the combat missions by the 201st Mexican Fighter Squadron submitted by Capt.2/o. Amadeo Castro Almanza on March 12, 1946 to the American Embassy in Mexico city shows the following type of bombs dropped by the unit:

The 201st Mexican Squadron was given credit for putting out of action about 30,000 Japanese troops and the destruction of enemy held-buildings, vehicles, tanks, anti-aircraft guns, machine guns emplacements and ammunition depots.

American Personnel assigned to the MEAF, 201st Mexican Fighter Squadron in the Philippines

Lt.Col. Arthur W. Kellong, USAAF. Assigned to the command and staff of the MEAF

Note American and Mexican records do not record by name the American pilots from the liaison group or that of the 58th Fighter Group that flew in combat with the 201st Fighter Squadron. We only know that they participated in 26 missions.

Mexican Personnel of the Staff of the Mexican Expeditionary Air Force assigned to the V. Fighter Command, June-July 1945

No Glamour. No Glory! The Story of the 58th Fighter Group of World War II.