Italian submarines and surface vessels in the Far East: 1940-45

In the course of World War II, although with a very limited force, the Regia Marina Italiana was present in the remote waters of the Indian Ocean and the Pacific. This presence, dating back to the Boxer Revolution of 1901, consisted of two gun boats located in Tiensin, the Lepanto and the Carlotto,1 along with some detachments of troops assigned to the defence of the small Italian commercial interests.

After Italy's entry into the war, Supermarina (the Navy High Command) ordered some units based in Massawa, Eritrea transferred to the Far East. This move was the result of well-founded fear that the A.O.I. (Italian East African Empire) would soon fall, thus allowing the British to capture the Italian vessels. In February 1941, just two months before the fall of Massawa, the colonial sloop Eritrea (armed with four 120mm guns, two 40mm and two 13.2 mm machine guns) and the armed ships Ramb I and Ramb II left for Kobe, Japan or, as an alternate, Shanghai or Tientsin. The two Rambs, built as banana ships, were modern and fast and had been transformed into auxiliary cruisers with the installation of four 120 mm guns and some 13.2 mm anti-aircraft machine guns.

While the Eritrea and the Ramb II reached their destination eluding British patrols, the Ramb I was less fortunate and was sunk by the British cruiser Leander near the Maldives Islands in the Indian Ocean. Despite the partial failure of the relocation mission, the Italian diplomats and military attachés in Tokyo discussed with the Japanese authorities the possibility of utilizing the Ramb II as a pirate ship (like the German Kormoran). 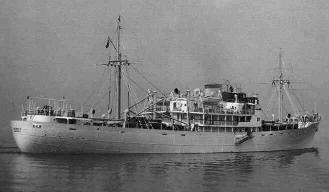 
The utilization of this modern and efficient vessel, which would have received some necessary alterations from the Kobe shipyard, was to be the interdiction of British traffic in the Indian Ocean. The ship, already since Massawa, was scheduled to receive several antiaircraft machine guns and a larger naval gun, such as a 120 mm or a 152 mm. Nevertheless, because of the strong opposition presented by the Japanese Navy, both the Ramb II and the Eritrea were left at their docks. Japan, at least until December 7th, 1941, the day of the sudden attack against Pearl Harbor, always wanted to avoid any confrontation with the USA and Great Britain. Only after the official declaration of war did the Japanese government allow the ship Eritrea to provide assistance to the oceanic submarines, which were arriving in Penang and Singapore from the very distant base in Bordeaux carrying rare goods.2

Some Italian Merchant Marine ships, like the Conte Verde, which were in Japanese or Chinese waters at the time of the declaration of war, were not utilized or were employed by the Japanese, while others attempted to reach Bordeaux. This base (known as Betasom) was used by the 27 Italian submarines which operated in the Atlantic and the Indian Oceans from September 1940 through September 1943 against the Allied blockade.

Some of these merchant ships, similar to the Himalaya, succeeded in the very difficult endeavor of transporting to Europe a discrete quantity of rare goods, such as rubber, tin, and quinine, while others were forced to seek refuge in neutral ports. As we will see, the Italian Navy during the war, similarly to the German one, attempted to utilize submarines to exchange goods with Japan despite the high losses and small advantages. 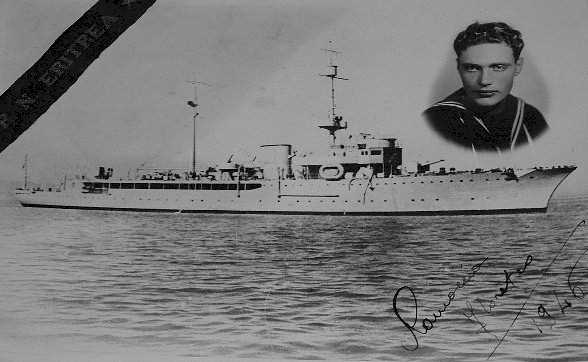 The R.N. Eritrea in a picture dated 1946 with also the portrait of
engineer  Floreteo Ramaccia
(Photo kindly provided by Mr. Frank Ramaccia)


On September 8th, 1943 at 2:00 AM (local time), the ship Eritrea was transferring from Singapore to Sabang in support of the submarine Cappellini , which had just arrived after a long and difficult journey to transport strategically important material to Tokyo. Having received a Reuter communiqué of the Italian surrender, the ship changed course for Colombo (Ceylon) through the strait of Sumatra avoiding the immediate and tenacious hunt by Japanese naval and aerial forces.3

The other units deployed in the sector were:

Gunboat Lepanto, C.C. Morante, and gunboat Carlotto, T.V. De Leonardis, were both in Shanghai, while the auxiliary cruiser Calitea II and Ramb II, C.C. C. Mazzella, were in Kobe for repair work. These last two units were scuttled on the 9th so not to fall into Japanese hands. The submarine Cappellini decided to fight along the Germans and the Japanese as part of the newly created "Repubblica Sociale Italiana", but once escorted to Singapore it was captured. Despite the pledge of allegiance of the captain, Commander Auconi, Admiral Hiroaka interned the ship and captured the crew serving them inhuman treatments. The Giuliani and the Torelli followed the same fate, even if the crew, but not the officers, wanted to keep fighting along with the old allies. The only unit saved was the Cagni, which, made aware of the armistice, reached Durban in South Africa and surrendered.

Despite the awful Japanese behavior, many Italian submariners in the Indian Ocean kept fighting for several months. The Italian boats were transferred to the German U-Boat command in Penang and continued operating with a mixed Italian-German crew. After the German surrender, on May 8th 1945, about 20 sailors kept fighting along the Japanese.5 For the record, the Torelli operated in Japanese waters until August 30th, 1945 and was even able to shoot down an American B-25 Mitchell, the last success of a "Japanese" naval vessel in War World Two.

2- The first German ship able to break through the Allied blockade was the Weserland (6,500 tons), under commander Krage who on December 28th, 1940 sailed from Kobe with a load of rubber, wolfram, felt, vegetable oil, tea, coffee and pharmaceutical products. The Waserland crossed the Pacific, Cape Horn, the Atlantic and arrived in Bordeaux on April 4th, 1941 after 98 days at sea. At the outbreak of war, 14 German and 2 Italian ships were locked in the Japanese ports of Yokohama, Osaka and Sasebo and in the Manchurian port of Dairen.

3- Between 1942 and 1943 the shipyard Tosi designed and built two large transport submarines, the Romolo and the Remo, originally developed to reach the Far East. These two submarines (from 2,210 to 2,606 tons) were able to transport 610 tons of goods and had a range of 12,000 km. The Romolo and Remo were the only two of 12 units planned and were lost upon their first cruise, one sunk by airplanes and the second one by an enemy submarine.

4- During the second half of May 1943, just after the end of some structural work, the first Italian transport submarine left Bordeaux followed by a few others. The fate of these vessels was a sad one; Two, the Tazzoli and the Barbarigo, disappeared at sea after their departure, probably sunk by Allied planes. The Giuliani and the Torelli, caught on September 8th in Penang, Malaya were captured by German forces. The apparent disaster which had stricken the Italian forces did not impede the Japanese from capturing in Penang 355 tons of war material coming from Germany, equivalent to 55% of the total load of the 6 Italian vessels. On the other hand, the Germans never received the 377 tons of rubber and the 184 tons of felt already loaded on the Italian submarines. As a matter of fact, the Germans did not want to sail these worn down vessels back to Bordeaux.

4a - 4b- The Italian submarines based at Betasom which underwent transformations were actually seven.
Cappellini, Tazzoli, Finzi, Giuliani and Bagnolin, Barbarigo, and Torelli.  The Tazzoli and the Barbarigo were sunk. The Cappellini, which had arrived in Penang on September 10th, 1943, was captured by the Germans and renamed U.IT.24. After May 8th, 1945 this unit was transferred to the Japanese who named it I.503. The Giuliani, which had arrived in Singapore in late summer 1943, was captured by the Germans and renamed U.IT.23. This vessel with a mixed Italian and German crew was sunk in the Malacca Strait in 1944 by the British submarine Tallyho. The Finzi, which in September 1943 was still in Bordeaux waiting for the completion of some repair work, was incorporated into the German Navy with the name U.IT.21. The vessel was never utilized as a transport and was sunk by the German in Bordeaux on August 25th, 1944 just before the arrival of Allied forces. 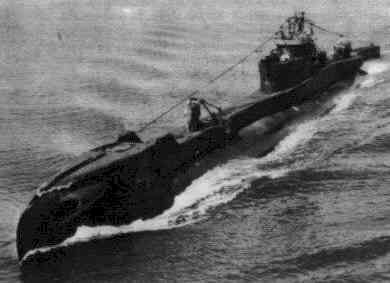