The Dutch submarines attack !
The Defence of the Dutch East Indies 1941-1942

The Submarine Flotilla also had a submarine tender Zuiderkruis ( 2661t and armament of 2 x 76mm guns and 2 x 20mm guns).


Defence of the Netherlands East Indies – Dutch Submarine Actions
• Submarine K-VII
The Dutch submarine K-VII was destroyed on 18 February 1942 during a Japanese air raid while she is submerged in Soerabaja harbour.

• Submarine K-IX
On 7 December 1941 the Dutch submarine K-IX was under repair in Soerabaja harbour. The crew of K-IX is transferred to the K-X. On March 1942 the submarine returned to active service under command of Lt. T. Brunstig. She performed a war patrol to the Gulf of Siam but she had to return early due to some engine problems. She sailed to Fremantle, Australia because at that time Soerabaja was already occupied by the Japanese.

• Submarine K-X
From 8 December 1941 till 2 March 1942 is under command of Lt.Cdr. P.G.de Back. On 25 December 1941 she is ordered to sail to the Celebes Sea (via Ambon Island) in order to attack a Japanese Invasion Fleet in front of Davao City, Philippines. Five days later she received an order to sail to Tarakan Island, Borneo. She patrolled for a while between Borneo and Java but on 10 January 1942 she returned to Tarakan Island due to engine problems. On 11 January the Japanese invade Tarakan Island. The K-X escapes although attacked by a Japanese floatplane while she was sailing through a Dutch minefield. She sails via the Makassar Strait to Soerabaja, Java Island. In the period between 28 February - 1 March 1942 she conducted several patrols in the Java Sea and off the Philippines but she had to return to Soerabaja again because of engine problems. While she was sailing through the Java Sea near Rembang (Java), she was attacked by a Japanese destroyer and seriously damaged by the depth-charges. Despite that she sailed safely to Soerabaja. On 2 March 1942 she was scuttled in Soerabaja in order to avoid Japanese capture.

Dutch submarine K-X
• Submarine K-XI
On 7 December 1941 the Dutch submarine K-XI was patrolling in the Gulf of Siam. From 8 December 1941 till 23 January 1942 the K-XI was based at the British Naval Base in Singapore and was subordinated to British Eastern Fleet Command. Till 21 December she patrolled off the East Coast of Malacca. On 10 December she attacked a Japanese landing fleet north east of Malacca. After that she patrolled till 3 January 1942 in the South China Sea where no attacks on the enemy are made. From 10 January she again patrolled, this time off the West Coast of Malacca. She returned to the Dutch Naval Base at Soerabaja for a while due to engine failure. On 5 February 1942 she was again at sea, this time she patrolled off the East Coast of Sumatra where again no attacks on the Japanese Fleet were made. She again returned to Soerabaja for repair and because of the threat of Japanese occupation of Soerabaja she sailed to Colombo, Sri Lanka.

• Submarine K-XIII
Between 20 September 1941 - 6 January 1942 the K-XIII was under the command of Lt.Cdr. M.A.J. Derksema. Between 7 December - 16 December 1941 it patrolled off Malaya and in the South China Sea. On 10 December 1941 unsuccessfully attacked the Japanese invasion fleet off the north east coast of Malaya peninsula. During 14 December - 16 December 1941 the K-XIII patrolled near the Pahang and Kuantang Rivers. In the period between 8 December - 21 December 1941 it is based at Singapore Naval Base and is placed under British Eastern Fleet operational control. On 21 December 1941 a battery explosion in Singapore harbour damaged K-XIII. Three men are killed and three are wounded. From 21 December 1941 - 6 January 1942 is escorted by the destroyer Van Nes to Soerabaya for much needed repairs. Most of its crew is transfered to the K-VIII. The submarine arrived in Soerabaja on 6 January 1942 and stayed under repair in the naval dock in Soerabaja from January till March 1942. On 2 March 1942 the Dutch decided to scuttle the boat in order to prevent the invading Japanese forces from capturing the damaged boat.

• Submarine K-XIV
From 6 December - 27 December 1941 submarine K-KIV patrolled west of Borneo. On 23 December 1941 the K-XIV patrolled off Kuching where she attacked several Japanese vessels which were anchored there:
- one destroyer was unsuccessfully attacked
- one freighter was unsuccessfully attacked
- Japanese transport ship Katori Maru (9848t) was torpedoed and sunk
- Japanese transport ship Hiyoshi Maru (4943t) was torpedoed and sunk
- Japanese transport ship Hokkai Maru (8416t) was damaged
- Japanese tanker Nichiran Maru (6503t) was damaged
After this attack the K-XIV returned to Soerabaja. She had spent all her torpedoes. On 6 January-22 February 1942 the K-XIV patrolled in the Makassar Strait. She attacked one Japanese convoy but the attack is unsuccessful and she was also damaged during this attack. Therefore she returned to Soerabaja. During 14 February - 12/13 March 1942 the K-XIV patrolled in the north of Klabat Bay, in the South China Sea and in the western part of the Java Sea while expecting Japanese landings on this main Indonesian Island. On 1 March 1942 the K-XIV attacked one Japanese Kuma Class cruiser but the attack was unsuccessful. She then sailed straight to Colombo, Sri Lanka.

• Submarine K-XV
During 8 December - 16 December 1941 the K-XV patrolled off west Borneo. After that she patrolled till 30 December 1941 in the Java Sea. On 23 December she patrolled for a while off Kuching while a Japanese invasion was expected. In January - February 1942 the K-XV was under repair in Soerabaja. From 14 February - 13 March 1942 submarine K-XV patrolled in the Java Sea and in the Indian Ocean. Two Japanese ships were attacked:
- on 20 February 1942 an unsuccessful attack on a Japanese freighter
- on 1 March 1942 Japanese tanker Tsurumi is attacked an damaged in the Bay of Bantam, north west Java Island. During this last attack the K-XV suffered some damage to the fuel tanks. She sailed to Colombo, Sri Lanka.

• Submarine K-XVI
From 8 December - 25 December 1942 submarine K-XVI patrolled between Soerabaja and the South China Sea. On 23 December the K-XVI patrolled off Kuching where a Japanese invasion is expected. On 24 December 1941 the K-XVI torpedoed and sank a Japanese destroyer Sagiri (1750t) north of Kuching-position 01 d. 34'' N., 110 d. 21'' E.; the K-XVI tried to attack another Japanese destroyer Marakumo but this attack failed. Encouraged with this success the Dutch Commander, Lt.Cdr. L.J. Jarman, remained too long in these dangerous waters and on the following day on 24 December Dutch submarine K-XVI was torpedoed by the Japanese submarine I-66 (Cdr. Yoshitome). All the crew were lost.

Dutch submarine K-XVI
• Submarine K-XVII
On 8 December 1941 the K-XVII was based in Singapore and subordinated to British Eastern Fleet Command. On 8 December she patrolled off the East Coast of Malacca (Pahang River Area) and in the Gulf of Siam. At the end of December 1941 (21 December?) K-XVII struck a sea mine while she was exiting the Gulf of Siam. All the crew were lost. She sailed right into a Japanese line of mines, which also sunk the Dutch submarine 0-16.

• Submarine K-XVIII
From 6 January 1941 the K-XVIII patrolled in the Makassar Strait. Several ships were attacked:
- on 22 February 1942 Dutch lightship Orion, which was anchored near Balikpapan, was scuttled by the gunfire of K-XVIII
- on 23/24 January 1942 a Japanese convoy off Balikpapan is attacked. The Japanese passenger ship Tsuruga Maru (6988t) is torpedoed and sunk. On 24 January during the attack in Balikpapan the K-XVIII was heavily damaged by depth-charges. She had to return to Soerabaja. In Soerabaja the K-XVIII was used to sink docked Dutch destroyer Banckert which was severely damaged in air raids on 24th and 28th of February 1942. On 2 March 1942 was submarine K-XVIII was scuttled in Soerabaja in order to avoid Japanese capture. 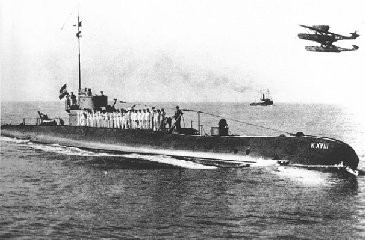 Dutch submarine O-19
• Submarine O-20
In December 1941 O-20 was based in Singapore and under British Eastern Fleet Command. From 14 December - 19 December the submarine O-20 patrolled in the South China Sea. On 19 December 1941 the O-20 unsuccessfully attacked a Japanese destroyer. After being chased by destroyers Yugiri, Uranami, Ayanami and planes, the crew of the submarine O-20 scuttled their submarine 25 miles east of Kota Bharu (East Coast of Malaya). The following day (20 December) a Japanese destroyer Uranami rescued 32 survivors but seven crew members, including Commander Lt.Cdr. P.G.J. Snippe were lost.

If you would like to know more about Dutch submarines and their operations in the Pacific and European Theatres, then 'The submarines of the Royal Natherlands Navy Website' is the right place for you ...